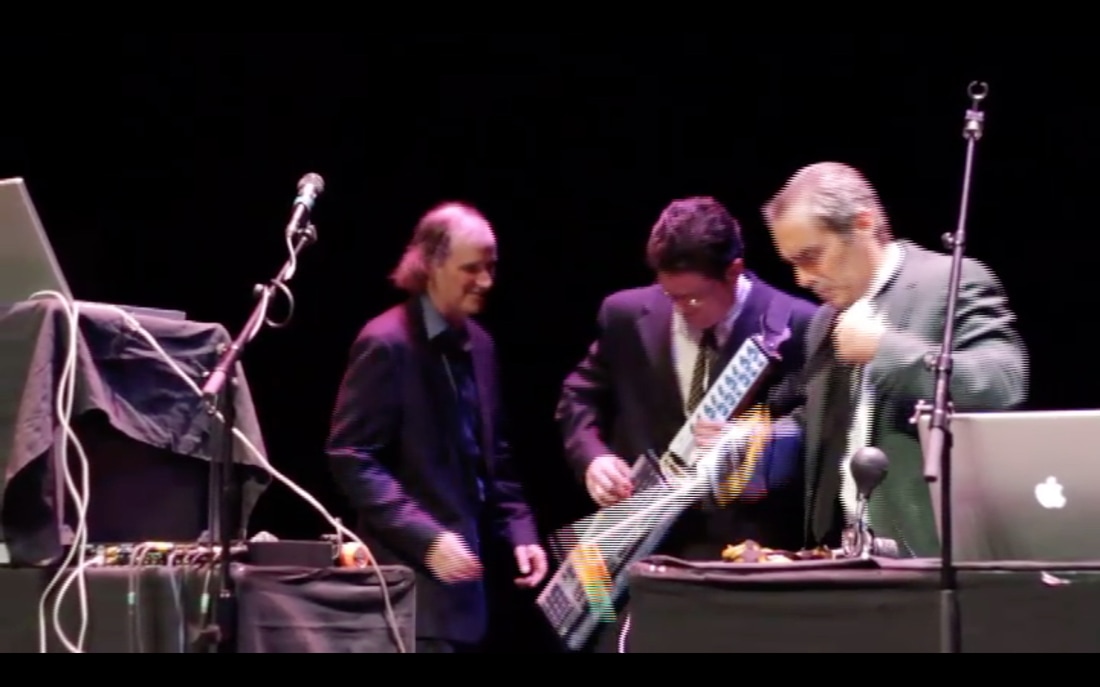 Since 1993, the Convolution Brothers, a trio consisting of Miller Puckette, Cort Lippe, and Zack Settel (AKA Convolution
Brothers number 0, 1, and 2 respectively), have presented a series of partly pre-composed, partly improvised performances
from Tokyo to Helsinki, San Diego, Guanajuato, Thessaloniki, Santiago, Montreal, Paris, to the backwoods of Tennessee. ​
Materials for their music is reworked extensively from show to show, often drawn from recent experience. Paper, radio, TV, and the internet plow into our homes faster and faster and louder and louder. Our ID and credit cards have attached
magnetic strips which only a computer can read. Data bases we can't access know where we live; how much money we have; how many dental fillings; which home security system. The phone rings late at night; the caller turns out to be a machine
selling a religion or a cable TV system; our own answering machine takes the call, and the Brothers, like everyone, attempt to grapple with life in the early 21st century.

The early performances were collectively called Gandy Bridge. This title was chosen by the Brothers after each of them
visited the Gandy Bridge separately. The bridge has served as a focal point for their work, combining the independent
experiences and impressions of their visits. The bridge may be a powerful metaphor for many things, but electronics are
integral to establishing the the dramatic situations created by the Brothers, and their fascination in the spectral world fuels their imaginations. While sound transformations are carried out using the formidable PD and MSP audio processing
languages, developed by Miller Puckette and David Zicarelli and using a technique developed at Bell Laboratories known as the vocoder, which allows the Brothers to stamp the timbre of one sound onto the pitch or pitches present in another—and one performer's voice inflection can be projected onto another performer's articulation, rendering a new interpretation of text material—this resulting convolution (or "audio-morph") only allows the Brothers to voice messages that may augment or contradict their original meaning, so that even while employing sounds taken from all walks of life, from the pristine
incantations of the high priest to answering machine messages to the lullaby of the suckling infant, songs of human
suffering and love which become raw material for the Brothers, these technological and poetical tools only act as a
springboard enabling the Brothers to explore their fundamental concern: connecting with forces beyond scientific
understanding of the laws of nature.

The CBs are among the roughly half-dozen masters worldwide who have unlocked the secret of real-time frequency-
domain processing (It has been rumored that both PD and MSP software were deliberately designed to make this extremely difficult in order to keep the circle of initiates as small as possible.) The Brothers have occasionally released some
information about their techniques in hard-to-find, highly specialized publications such as the 1996 IEEE Mohonk
Conference proceedings. Signal processing experts have so far declined to comment in print on the CBs' work. For reasons which remain obscure, it has proved difficult to obtain clear information from the CBs regarding their pieces. It may well be the extreme complexity and sophistication of their work which makes their attempts at explanation hard to understand.
Musicologists are also seeking to find out what might have motivated the CBs to develop their particular style. One thing is clear though: despite the rather extreme nature of some of the sounds that their computers might emit, the CBs assure
audiences that no actual harm is done to any hardware during performances.

A review of a performance in San Diego:
"The Convolution Brothers, consisting of Cort Lippe and Zack Settel, ended the program with Gandy Bridge IV. ... This piece was definitely the most technically complex of the concert, performing real-time convolution of both sound files and their
own voices using the ISPW. One example which raised more than a few eyebrows and laughs, was a duet between Mr. Lippe and Mr. Settel, using an Otis Redding song as the convoluted soundfile. The impression they created as they jumped from
one sound to the next, was that of two kids playing....their performance contained moments of real music and novelty....
-Mark Danks, Fall 1995 Computer Music Journal , MIT Press

A review of a performance at ICMC-1997 in Thessaloniki:
"The finale for the evening's entertainment was presented by the hilarious and talented "Convolution Brothers," Cort Lippe and Zack Settel. Entitled "Gandy Bridge XI," this improvisation was the comedy highlight of the evening, and was the
funniest computer music this author has ever seen. Billed as an "ISDN" performance, the premise was that Zack Settel was
in Florida and was to perform in real-time with Cort Lippe, and that they were not completely set up or ready when it was
time for them to perform. Thus, the first few minutes were spent while they presumably fiddled around with the network,
Settel nervously and periodically querying, "Did you get the ping?" Cort was also testing out his microphone and would
whisper into it while furiously setting levels, until an enormous burst of noise erupted from his equipment, leaving him
spluttering and frantically reaching for knobs. After a few minutes of this sort of thing, Settel's video feed over "ISDN"
showed smoke pouring out of his equipment and filling up the room. Simultaneously, from offstage, a cloud of smoke was
gathering. Shortly, Settel came coughing and staggering from the wings, without pants. Needless to say, the remainder of
the performance was equally wacky, with bizarre voice processing of sentences such as "preference is to be given to
compositions in a major key" and "the double bass is to be played only with a bow," as well as the judicious use of a
PlaySkool PS-468 toy vocoder. The audience seemed to truly enjoy this gem of a performance; it was a rare moment of
humor expressed in a crowd of folks who are known for their seriousness. The ICMC should continue to encourage this sort of activity, because it allowed the audience to laugh at itself via the performers onstage and (if temporarily) drop the
seriousness of attitude in the conference setting. Certainly, the gags of the Convolution Brothers hit home, and everyone in the crowd seemed to enjoy the opportunity to laugh together. Overall, the Midnight Cabaret concert on September 28 was a terrific success and this author hopes to see many more like it. Perhaps because of implicit expectations of being
entertained, the audience was quite demanding. The normal bounds of propriety were eschewed in this context, and if the
audience didn't approve of a work, they were surprisingly vocal about it -- grumbling, hooting, heckling, and talking. While
there were situations in which this created some inappropriate behavior, it was an amazing inversion for computer music,
which has in the past developed much of the technology upon which the major commercial music styles are based, but
which has not benefited from the success of those forms. Here we were presented with a glimpse of a possible future in
which thoughtful, computer-based music might be refreshingly normalized to an "entertainment" environment, instead of
its usual place in a concert-hall. The concert progressed nicely from a very quiet and introspective beginning to a rather
raucous and hilarious conclusion. None of the pieces had more than two people on stage, which, although it made sense
given the constraints of transporting equipment, seemed a shame in retrospect. Many of the great live performances
(particularly in improvisational genres) do best when there are at least three people on stage whom to trade ideas off of.
Perhaps this is an area that could be useful for computer music -- filling up the space on stage with human beings to
​facilitate more interesting live performances.
-Teresa Marrin, Spring 1998 Computer Music Journal , MIT Press

2015           The Squeeze Theorem of Limits
The 2015 Sherwood Ebey Lecture in Mathematics, The University of the South, Sewanee, Tennessee