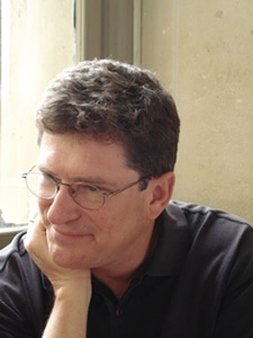 Cort Lippe studied Renaissance music in Italy for a year, composition and computer music with Larry Austin in the USA, and followed composition
and analysis seminars with various composers including Boulez,
Donatoni, K. Huber, Messiaen, Penderecki, Stockhausen, and Xenakis.

From 1980-83 he studied and did research in The Netherlands, at the
Instituut voor Sonologie with G.M. Koenig and Paul Berg in the fields of
computer and formalized music. From 1983-1994 he lived in France
where he worked for three years at the Centre d'Etudes de Mathematique
et Automatique Musicales (CEMAMu), founded by Iannis Xenakis, while
following Xenakis' courses on acoustics and formalized music at the
University of Paris. Subsequently, he worked for nine years at the Institut de Recherche et Coordination Acoustique/Musique (IRCAM), founded by
Pierre Boulez, where he gave courses on new technology in composition, developed real-time computer music applications, and was part of the
original development team for the software Max.

As a teacher, Lippe has given over 100 presentations and guest lectures around the world, and has been a visiting professor at the Sonology Department of Kunitachi College of Music, Tokyo (1992, 1999-2007,
and 2010-present), the Carl Nielsen Conservatory of Music, Odense, Denmark (1999-2001), New York
University (2007), and as recipient of a Fulbright Award in 2009, he spent six months teaching and doing research at the National and Kapodistiran University of Athens, Greece. Since 1994 he has taught in the Department of Music of the University at Buffalo, New York where he is an associate professor of
composition and director of the Lejaren Hiller Computer Music Studios.

Since 1993 Lippe has collaborated with the composers/researchers Miller Puckette and Zack Settel,
​performing as the Convolution Brothers at festivals worldwide.

His music has been performed at more than 100 peer-reviewed and 150 invited national and
international festivals and conferences, including the International Computer Music Conference, ISCM
World Music Days, Gaudeamus (The Netherlands), the Music Today Festival (Tokyo), the Bourges Synthese
Festival (France), the Huddersfield Festival (UK), the NOW Festival (Germany), and SARC’s Sonorities
Festival (UK).